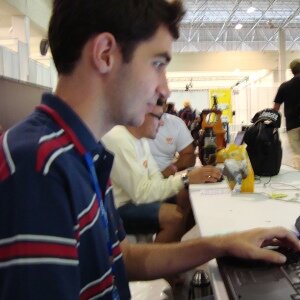 I program since 2001, when I entered the equivalent for High School here in Brazil. I'm Bachelor in CS and I'm finishing my MSc. I'm already accepted for a PhD here too.

I've tried to start using GNU/Linux back in 2001, but I've really started using it in a daily basis since 2005. In 2007 I've abandoned MS Windows and since then I just used GNU/Linux to do whatever I want or need.

I've first heard about Ruby in 2004, on my first year as undergrad student. I started to casually program in Ruby in 2005, and since 2007~2008 I've been programming in Ruby on a daily basis. 90% of all code I've written on the past two years was in Ruby, including my entire MSc's modules and scripts.

I have little experience with Rails. I've done just two or three weekend projects using Rails so far, but I think it's really cool and easy. I also think I know Rails code better than I code in Rails, because I've studied it a bit to get some of its good insights.

A few weeks ago I gave my 10th talk. Most of them were on jQuery (4) and Ruby (2), but I also give talks about Information Retrieval, Intelligent Systems and other areas related to my MSc.